This is the type of lifting ring seen on many of the earliest Shermans. Unlike most other lifting rings, they are not castings. For want of a better term, we refer to this type as "bent rod" lifting rings. Fisher Body, Lima Locomotive, Baldwin Locomotive, Pressed Steel Car, Pacific Car & Foundry, ALCO & Pullman Standard started production with these. They were quickly supplanted by various cast types, except on Lima Locomotive M4A1s, where they were used almost to the end of production.

The M4A1(75) pictured above is believed to have been built by Lima Locomotive Works, during their final month of production - September, 1943. It is thought that some of the last Lima built M4A1s used upper hulls cast by Pittsburgh Steel Foundry. These appear to have had the hull lifting rings cast in, and on an angle (as seen on the photos).

Some of the very first M4A1s produced by Pacific Car & Foundry have what we call "blocky" lifting rings (photo 2 courtesy of David Doyle). It is thought that this type of lifting rings was used on Pacific Car and Foundry M4A1s from May to December 1942/January 1943.

For expediency, we call this variant the "padded" hull lifting ring. Photographs and surviving tanks suggest that both Chrysler & Ford started production with this type. Thus far, "padded" lifting rings have not been seen on Shermans manufactured after February 1943, except for ALCO-built M4s, which had them until the summer of 1943, and Fisher-built M4A2(75)s, which had them until the beginning of 1944.

The rarest variant of "padded" lifting ring has been seen on two surviving Shermans - both February 1943 production Baldwin M4(75)s. Due to the rarity, at first it was thought that they may have been a restoration replacement. However, a recently found snapshot clearly shows the same type of lifting ring on the rear of an M4 photographed in Oran, ca. mid 1943. So, this odd type of lifting ring does indeed date to WW2. 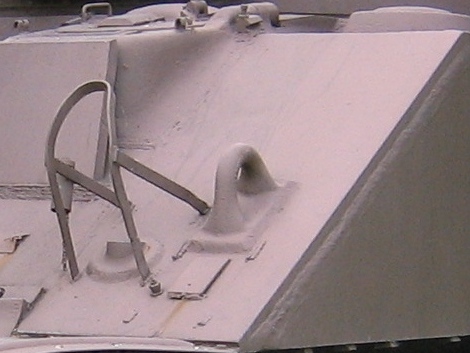 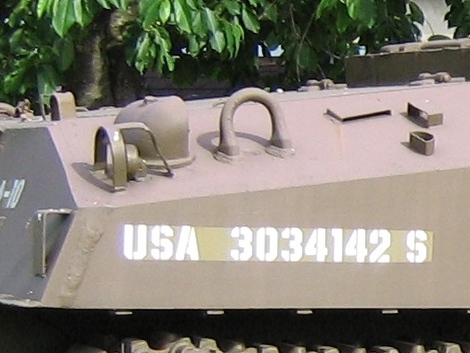 Note that on some Sherman tanks (for example on small hatch M4A3s and M4A4s), there was a transition period during which some vehicles got both the "padded" and "cast" lifting rings on a same hull, as shown on these two photos of the same M4A4. Mixed lifting rings have been seen on tanks identified as having been built in January 1943.