Some of the M4A1 76mm Shermans preserved in France, Western Europe or the USA, were upgraded by Bowen McLaughlin in the 1950s, to be delivered to Allied countries as part of the Mutual Defense Assistance Program.

The differences with the "as-built" WW2 Shermans are the following :
-Infantry Phone and fittings on the upper rear hull plate
-relocation of the spare tracks from the rear hull to the turret sides, they often hide the turret serial number
-gun travel lock : the WW2 "two fingers" gun travel lock were replaced by the more secure and post-WW2 "clamp" type gun travel lock
-fittings for canvas mantlet cover
-antenna fitting on the front turret roof
-welded turret smoke mortar hole
-all new road wheels
-the muzzle brake is a late war feature. It entered in production in October, 1944 and appeared in theater in February, 1945, so it is not seen in most of the M4A1(76)s that served in ETO in 1944-45

These comparison pictures show the differences between an "as-built" M4A1(76) turret (above) and an upgraded tank (below) : the additional tracks on the turret side, the fittings for canvas mantlet cover, and the antenna bracket. 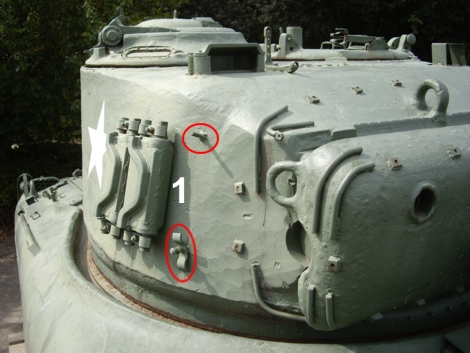 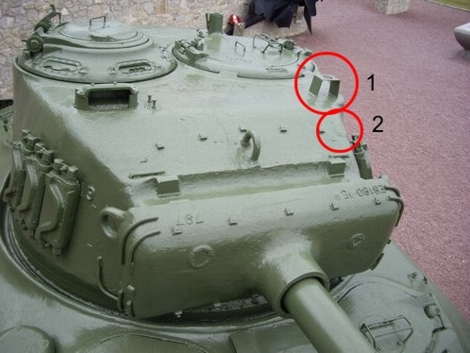 A close-up of the modifications on the turret :
The spare tracks (1) are fitted to the turret sides with the help of rods and nuts (circled in red). The turret was also fitted with a canvas cover for the gun mantlet. Rods and nuts were welded all over the gun shield. We would guess that it was factory installed by PSC on M4A1(76) HVSS starting in February or March, 1945. It was almost universally retrofitted to post war rebuilds. On the right side can be seen the antenna fitting on the front turret roof (#1) and the welded turret smoke mortar hole (#2). 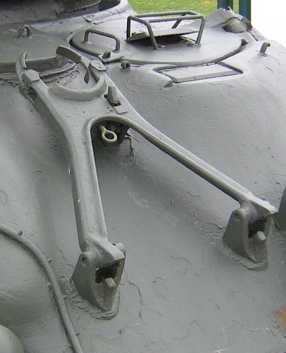 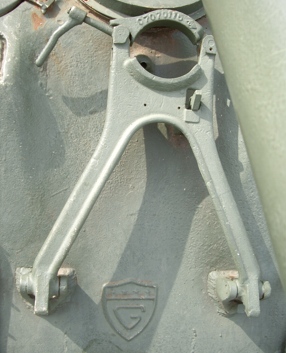 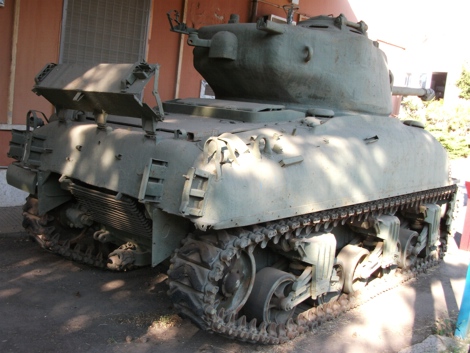 M4A1 76mm Shermans were built with a folding blanket roll rack installed on the upper rear hull plate, as seen above. Spare track holders were installed on VVSS units only. 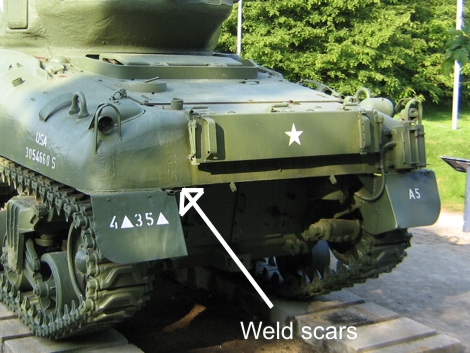 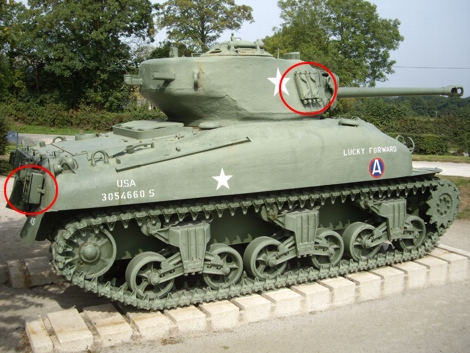 The "Infantry Phones" (or the fittings) are seen on the majority of surviving M4A1(76)s in Europe. We believe these were installed during the early 1950s remanufacture program, as one of the specifications was "Redesign inter-communication system." In the case of VVSS units, the spare track holders were removed from the rear, and the phone was installed on the right side. Three spare tracks were then mounted on each side of the turret. 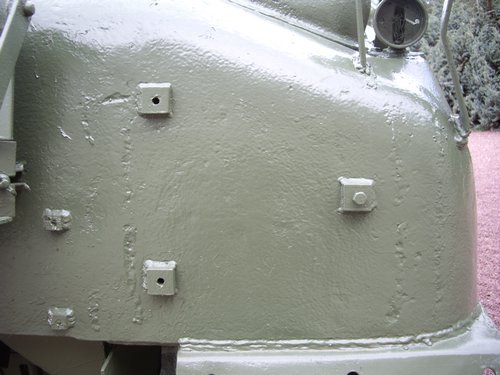 In many cases, the box for the infantry phone was removed, and only the fittings are visible. This is a clue of an M4A1 remanufactured in the 1950s.