Bogie assembly, Vertical Volute Spring System (VVSS), with the "offset roller" and skid.
This is the most common type that can be found on Sherman tanks.

Welded spoke roadwheels. On the right side picture, the holes are blanked off.

Pressed spoke roadwheels. The example on the left is an earlier version that showed up on late production M3s (Mike Canaday). Left side photo courtesy of Daniel Reed.

The welded spoke with "small holes" (left) and the solid, "smooth concave" wheels (right) were introduced in Summer 1944, and appear to have been prevalent by Fall 1944. It is interesting to note the difference in hub sizes between the wheels. The hub diameter was increased to fit a larger (stronger) bearing (Kurt Laughlin).

The "smooth convex" roadwheel seem to have appeared late in the war, maybe in 1945. It has not been seen on a WW2 period picture yet. Any more information about this roadwheel variant is the most welcome.

Four different sprocket types that can be found on Shermans with VVSS suspension, but also on HVSS, as these parts were standard to both suspensions. The hub (the part between the 2 sprockets) on a VVSS suspension is thinner than those installed on HVSS suspension. The two first pictures show a sprocket that is cut from plate. The third photo shows a forging sprocket, primarily used by Chrysler. The fourth photo shows a casting sprocket with dimples, mainly used by Ford. The fifth photo shows a simpler plate design, the metal lock tabs are not WW2 era. The US did not use lock tabs to hold the nuts (Kurt Laughlin).

Foure different models of idler wheels that can be found on Shermans with VVSS suspension. The third one is a rare variant. The last one, the "four spoke type", is thought to be invented by France after the war. It only appears on French tanks (Kurt Laughlin).
(The third photo is courtesy of Kurt Laughlin).

Three different types of return rollers assemblies.
The first one on the left side (courtesy of Chris Hughes) is an early return roller assembly with an horizontal bracket, that was installed on M4, M4A1, M4A2, M4A3 57° and M4A4 tanks. On the right side, the same type with a pillow to rise the roller, installed from July 1943.
The third picture shows the upswept bracket, that was installed on M4 105mm, M4A3 47° (75mm, 76mm and 105mm) and M4A2 76mm tanks.
The M4A1 76mm got the horizontal bracket at first, and later got the upswept bracket while still in production.
The last picture shows an upswept bracket without the roller assembly.

Three different types of skids, from the earliest model to the latest one (The first photo is courtesy of Chris Hughes).
The first type of skid is usually found on M3 Lee tanks, but can be found on some M4 tanks,
for example when an M3 Lee bogie was used to repair the damaged suspension of an M4. 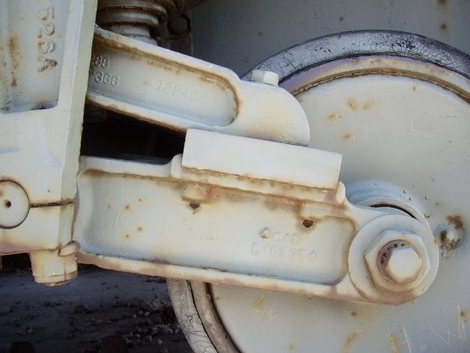 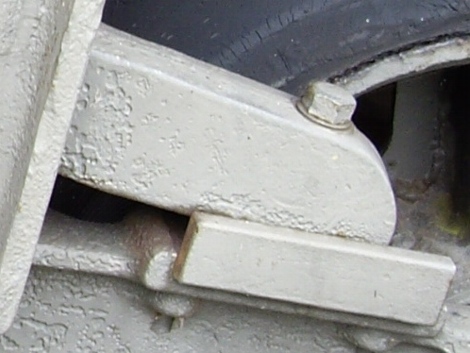 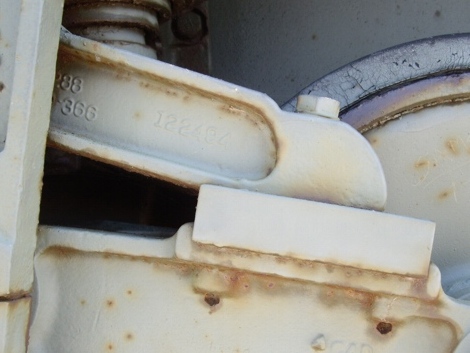 A comparison between the US-made Sherman bogie unit (left side) and the Canadian-made (right side), which is found on some Ram, M4A1 Grizzly tanks and Sexton self-propelled guns. Note that the Canadian variant has prominent ribs on the face of the bogie castings, compared to the US unit.