Synthesis / evolution of the 75mm turret

#1) The initial design of the Sherman 75mm turret can be seen on the T6 pilot (above). This turret featured a gunner's rotor sight device, pistol ports with M3 Lee style protectoscopes on both the left & right sides, the M3 Lee MG cupola, & a very simple gun shield. Note that neither the turret, or the gun are equipped with lifting rings.

#2) Some features of the T6  turret were replaced or improved by the time that production got underway. The tank commander's split hatch (as seen on the left-side picture above) replaced the M3 Lee style MG cupola. Production turrets were built with a pistol port with solid door on the left side only (right-side picture).

#3) A small number of the first production turrets continued to have the rotor sight device (circled in red). From "counting heads," it is thought that about the first 30 Lima Locomotive Works built Shermans, & perhaps the first 10 Pressed Steel Cars had that device. It was vulnerable to being fouled by bullet splash, & by April, 1942 had been replaced in production with the gunner's periscope. As best we can tell, no other company's Shermans used the rotor sight device, so this should only be seen on very early M4A1s. The rotor sight device was considered "not-battle worthy", so those turrets were not to be shipped overseas to combat units. However, at least one slipped through the cracks - a period photograph shows a "rotor sight" M4A1 as a battle casualty in Italy (photo courtesy of Massimo Foti).

#4) Early production turrets had the lifting rings mounted "high." By the end of 1942, they had been moved to the more commonly seen "low" position.

# 5) Based on feedback from the using arms, a number of changes were introduced into production in early 1943. A direct sight telescope was added, & to protect it & the coaxial MG, the rotor shield was widened. The new configuration was labeled "M34A1 Gun Mount".

There were a number of reports of crew injuries, because the original design of the hatches (left side photo) were not completely secured.  Consequently, positive hatch lock mechanisms were introduced into production (circled in red) & modification kits were provided for depot & field installation.

A spot light (circled in red on the center picture) was also introduced in early 1943. Many of the earlier turrets that lacked the spot light & its fittings (left-side photo), had them retrofitted during later upgrades. The right-side photo shows how the spotlight was mounted on the fitting.

# 6) Heretofore, all 75mm turrets had a pistol port on the rear left side (left-side photo). However, in April 1943 the Ordnance Department decided to eliminate the pistol port as they considered it a ballistic hazard. The D50878 turret was redesigned without the port (right-side photo).

As part of the same redesign, the "thin spot" was remedied with what modelers call the "cast in, thickened cheek" on the right front (circled in red on the left-side photo above), thereby eliminating the need to weld on the turret patch. The "bump" of the cast in, thickened cheek can be seen right where "Cornouailles" is painted on the right-side photo.

One of the interesting historical anomalies of French Lend Lease Shermans, is that some have the application of the welded on turret patch on turrets that already had the thickened cheek, & thus did not require it. "Valois", "Massaoua" & "Chemin des Dames" are historical examples where the French unnecessarily applied the turret patch to a turret that didn't need it. The patch is ill fitting as a consequence; Massaoua (right-side picture above) shows a particularly poor fit. This was surely done due to a language barrier misunderstanding.


The feedback from the using arms about the elimination of the pistol port was so negative, that in July 1943, Ordnance voted to reinstate it. By early 1944, only Fisher, Pressed Steel Car & Chrysler remained in the Sherman production program. The builders that left the program appear to have finished production with "no pistol port" turrets.

# 7) The "no pistol port" turrets began to enter the production lines in the summer of 1943 (see above), but in the meantime, factories & depots were directed to weld up any remaining pistol port turrets that were in the pipeline.  Here are shown 2 different types of weldings on the pistol port. Photo study let us think that the majority of US Army 75mm Shermans in the European Theater of Operations in 1944 had either a welded up or no pistol port turret.

# 8) The feedback from the using arms concerning the elimination of the pistol port was so negative, that in July 1943, Ordnance voted to reinstate it. Feedback also stressed the need for a loader's hatch, so once again, the D50878 turret was redesigned to include the pistol port as well as introduce the "oval loader's hatch." These turrets continued to have the "thickened cheek" on the right front (all the items circled in red on the photos above). Pressed Steel Car seems to have been the first manufacturer to introduce the D50878 turret with loader's hatch in late October 1943. The first ones were low bustle turrets like the one shown above. As Fisher-built M4A2s pretty much disappeared to Lend Lease (hence some difficulties in photo and surviving vehicles study) , we can only observe that the oval loader's hatch appears to have been introduced on M4A2(75)s very late in 1943 or early 1944. There are a few pictures of Soviet big hatch M4A2(75)s with low bustle turrets with loaders' hatches, which are presumed to be D50878s. 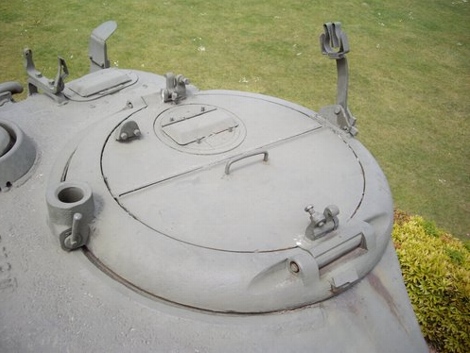 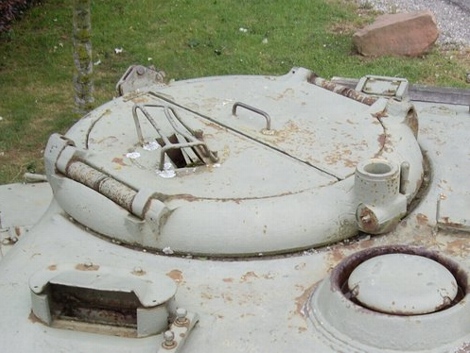 Improved split hatches ("turret hatch D69993 with equilabrator"), equipped with integral springs on the hinges appear to have entered the production lines in November 1943, on low bustle turrets. They equipped then the high bustle turrets. They replaced the older design shown on the left side photo.


#9) The 75mm turret rear profile was raised a few inches to improve clearance for the larger drivers' hatches of the later hull designs. This clearance change resulted in the "high bustle" turret, with older turrets termed as "low bustle". These are modelers' terms only, the Army would have referred to the turrets by drawing number.

The vast majority of high bustle turrets were produced with a new Part Number - D78461. However in November 1943, when Pressed Steel Car transitioned to the high bustle turret, the evidence suggest they continued to carry the old D50878 Part Number. Without more data, we can only speculate that PSC might have used between 300 & 400 low bustle, loader's hatch D50878 turrets, and between 200 and 300 high bustle, loader's hatch D50878 turrets.

From counting heads, it is thought that Chrysler transitioned directly from the D50878 low bustle, no pistol port turret to the D78461 high bustle in late November, 1943.

# 10) As supplies became available in late 1944, 75mm turrets were factory equipped with the commander's vision cupola (left side photo). Modification kits were also supplied for retrofit. Late high bustle D78461 turrets have a bulge to better accomodate the commander's vision cupola (right side photo). This modification seems to have appeared on turrets cast from November 1944 onward.

# 11) Due to the critical foundry situation, Fisher Body agreed to accept 300 used D50878 turrets left over from the retriever conversion program. They were to be updated to current standards, with M34A1 gun mounts & turret patches where needed. A loader's hatch was to be cut in. They were to be installed on large hatch M4A3(75)Ws at the rate of 100 per month starting in November 1944. There are a number of period photos of these, including some tanks with HVSS. Most or all of them appear to have been equipped with the commander's all round vision cupola. Perhaps a small number of them saw some combat in the ETO in the closing days. It's common knowledge that the low bustle turret caused some interference issues when mounted on a "big hatch" Sherman. However, that didn't seem to have been a problem with all the low bustle, no pistol port turrets on many M4 Composites. In any case, the Fisher docs mention that the recycled turrets "would require flame cutting of some stock on the lower rear corners of the radio bulge to eliminate interference with the drivers' doors". These photos of a 1942 production Union Steel turret (S/N 871) that was certainly recycled show hints of how some material was removed from the bottom corners of the turret bustle. The loader's hatch was also neatly welded in.

It is thought that some more low bustle bustle turrets received the same upgrade in the early 1950s. In that case, the 75mm gun was replaced with a 76mm. These "upgunned" Shermans were sent out as Military Assistance.