The M4 Sherman had many variations in hull and turret design during its production run. The earliest turret had the "low bustle", while the later ones had the "high bustle".

The turret of the T6 pilot featured the gunner's rotor sight device to the right side of the turret, two pistol ports on the turret sides with M3 Lee style protectoscopes, the M3 Lee MG cupola, & a very simple gun shield. Note that neither the turret, nor the gun are equipped with lifting rings.

The first production turrets continued to have the rotor sight device. From counting heads, it is thought that about the first 30 Lima LW Shermans & maybe the first 10 Pressed Steel Cars had that device. It was vulnerable to being fouled by bullet splash & was replaced in production with the gunner's periscope in April, 1942. As best we can tell, no other company's Shermans used the rotor sight device, so this should only be seen on very early M4A1s. Like the pepperpot exhaust, the rotor sight device was considered "not-battle worthy", so those turrets were not to be shipped overseas to combat units. However, at least one slipped through the cracks, & a period photography shows one as a battle casualty in Italy (photo courtesy of Massimo Foti).

The other features of the T6 turret were replaced or improved by the time that production got underway. The commander's split hatch quickly replaced the M3 Lee style MG cupola, the turrets were built with a pistol port with solid door on the left side only, & a rotor gun shield (mantlet) was added, to protect the gun works from bullet splash (as seen on the turret shown above). 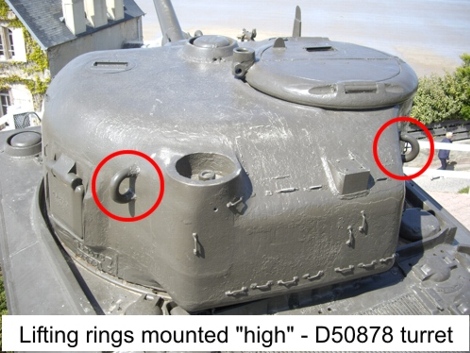 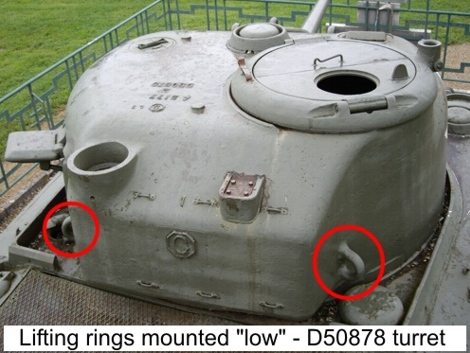 Early production turrets had the lifting rings mounted "high", and by the end of 1942, they had been moved to the more usual "low" position. 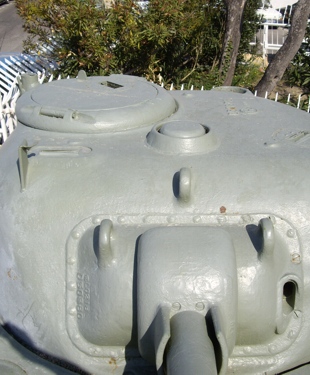 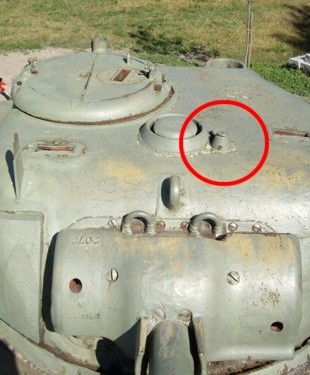 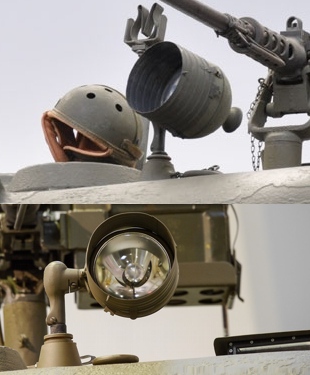 A spot light & fittings (circled in red on the center picture) began to be installed in early 1943. Earlier turrets don't have this fitting (left-side photo), unless it was installed during an upgrade of the tank. The right-side photo shows how the spotlight was mounted on the fitting. 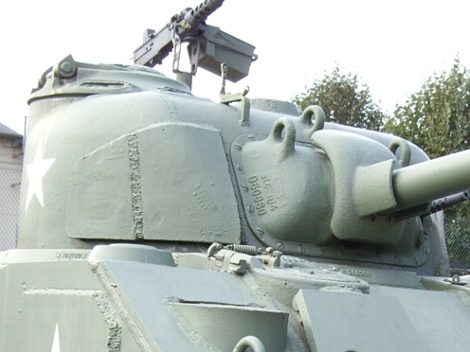 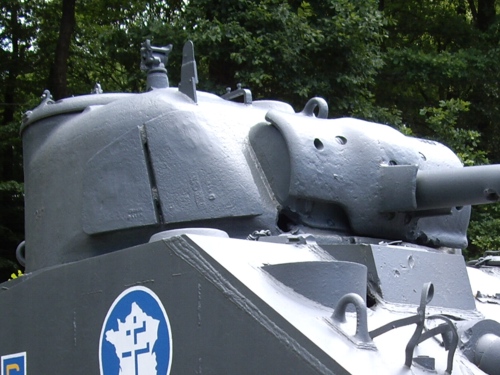 The 75mm turret rear profile was changed to improve clearance for the larger drivers' hatches of the later hull designs. This clearance change resulted in the "high bustle" turret with older turrets termed as "low bustle." These are modelers' terms only, the Army would have referred to the turrets by drawing number.

From counting heads, it is thought that Chrysler transitioned directly from the D50878 no pistol port turret to the D78461 high bustle in late November, 1943.

Late high bustle D78461 turrets have a bulge to better accomodate the commanders vision cupola (circled in red). This modification seems to have appeared on turrets produced from November 1944 (Joe DeMarco).


The 105mm turret is a transformed "High bustle" 75mm turret, with an additional ventilator at the rear (circled in red on the last photo),
behind the tank commander's and loader's hatches. It is usually found with the late model of tank commander's hatch (vision cupola). 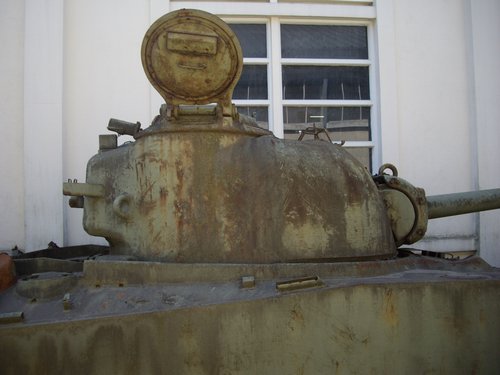 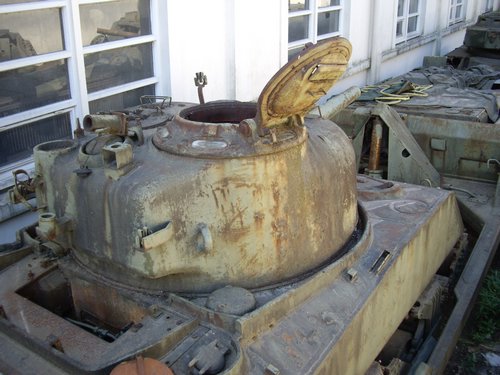 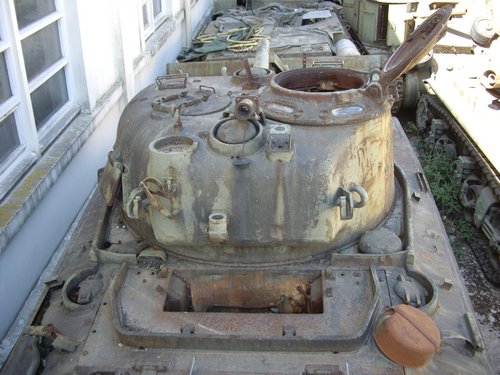 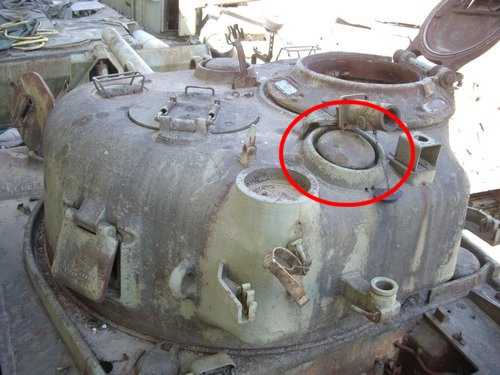 When the 76 mm gun was first installed in the M4 turret, mounting this gun in the original M4 turret proved to be problematic, and so the larger turret from the aborted T23 tank project was used instead for the definitive production version of the 76 mm M4 Shermans.
There were 3 main variants for the T23 turret.

The earliest T23 turrets that were installed on 76mm M4 Shermans directly came from the T23 production run. They can be recognized thanks to the extra lifting ring on the turret edge (circled in red), that was suppressed on later turrets. 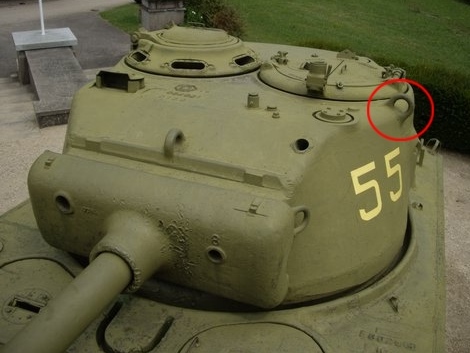 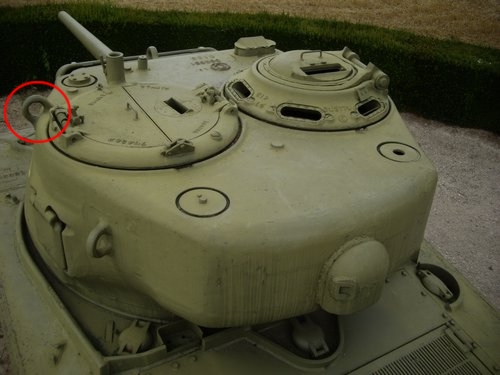 The following T23 turret variants have this extra lifting ring suppressed, as shown below. 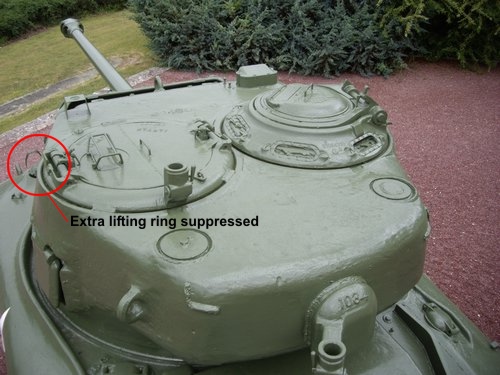 Those later turrets can be found :
-with 2 cupolas, the loader's cupola on the left side usually being a "split hatch" cupola (part number D82081, first picture below)

-with either a "split hatch cupola" or a "vision cupola" for the tank commander
and an oval hatch for the loader (part number 7054366, second and third pictures below) 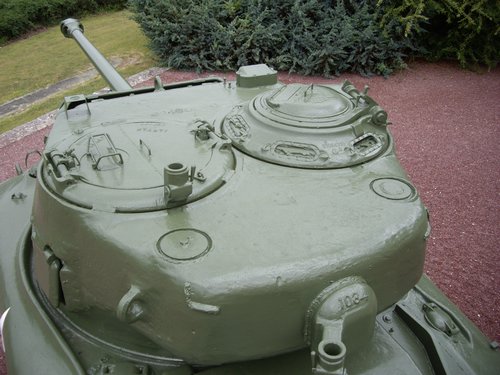 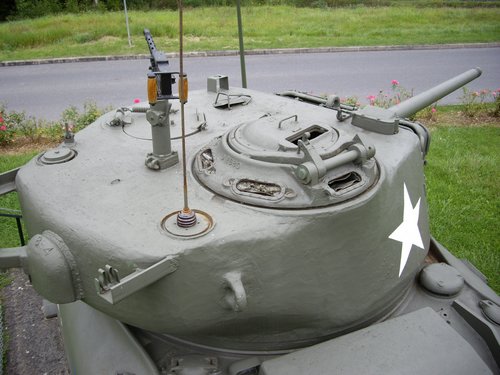 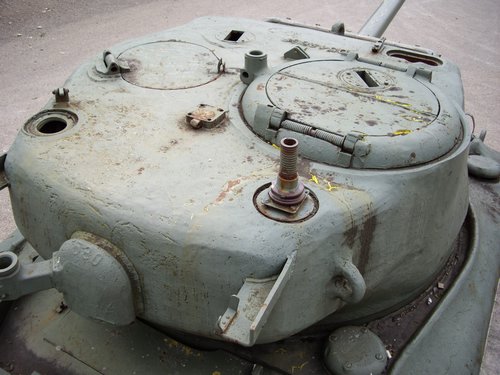 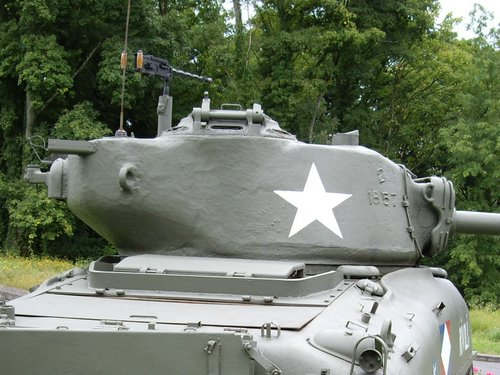 
The late T23 turrets have the loader's cupola replaced with an oval hatch. The tank commander's hatch on the right side is either a "split hatch cupola" (with a 2-pieces hatch, as seen on the picture) or a "vision cupola" (with a 1-piece hatch).