M4A3(75) Sherman
This variant was only manufactured by Ford Motor Company (1690 units produced). 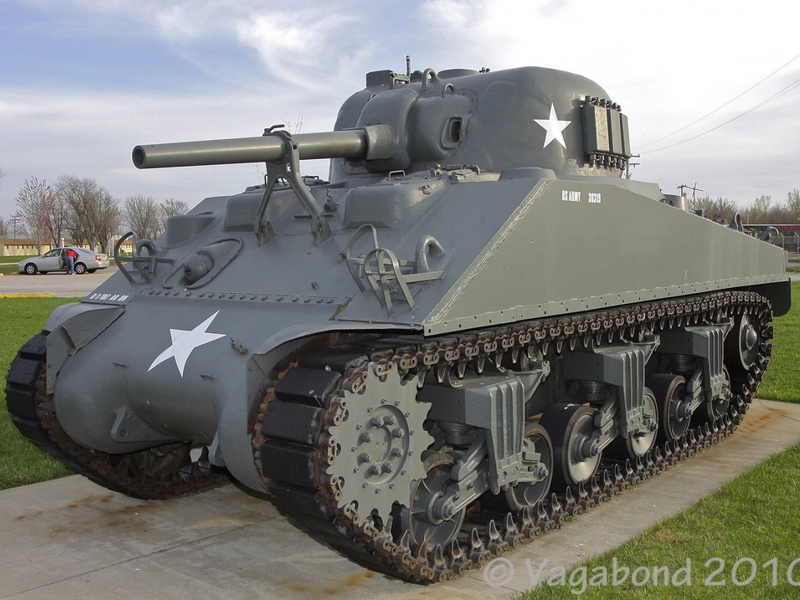 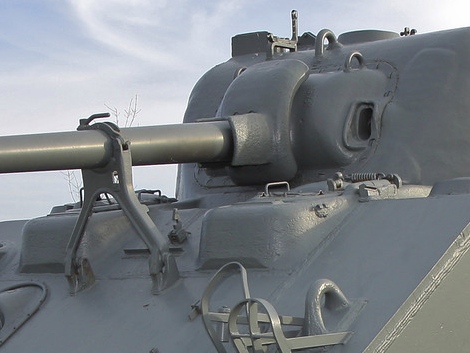 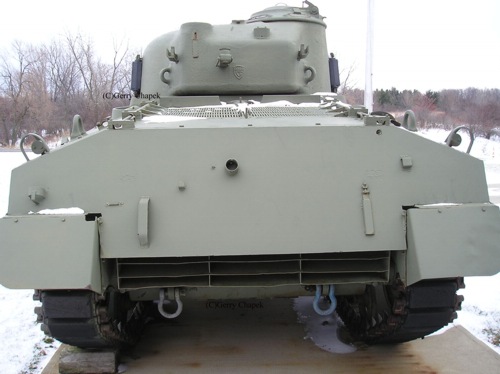 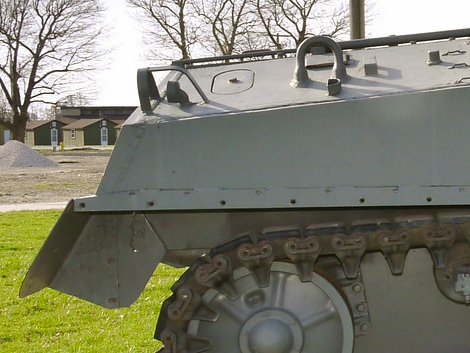 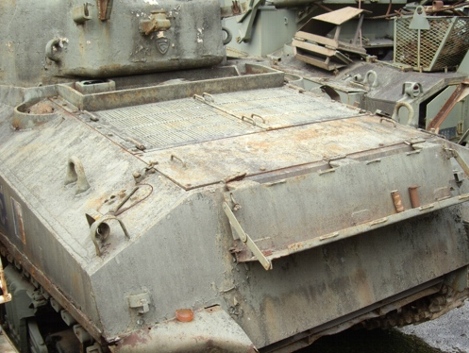 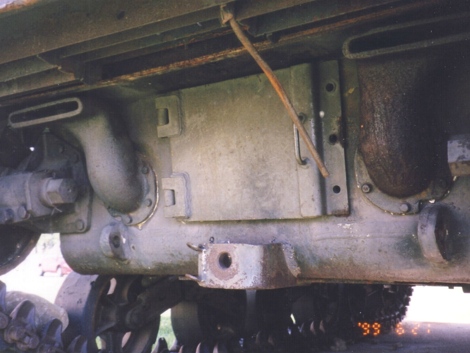 The lower rear hull has a single engine access door bracketed by a pair of heavy exhaust stacks. The sheet metal exhausts deflector is in the "up" position there. The transition piece between the floor and the vertical rear plate is rounded. 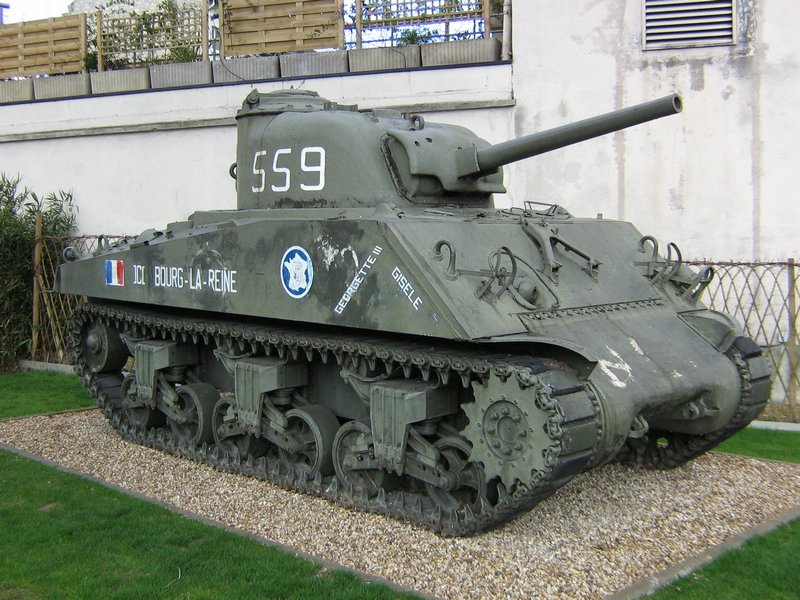 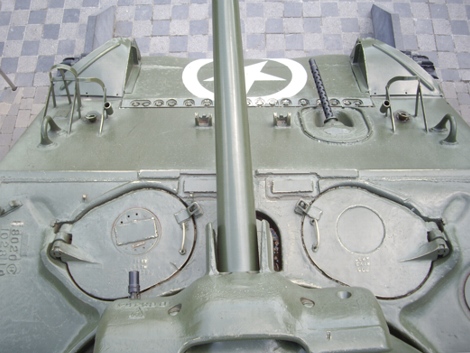 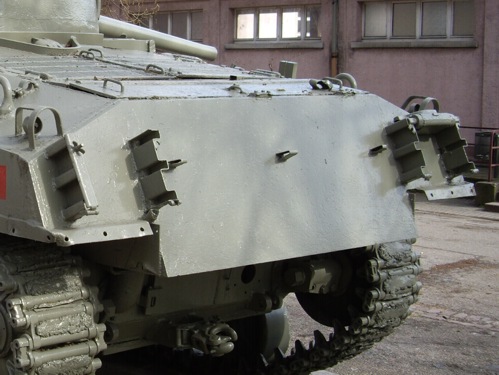 The rear hull plate is sloped, it often has additional racks for spare tracks. 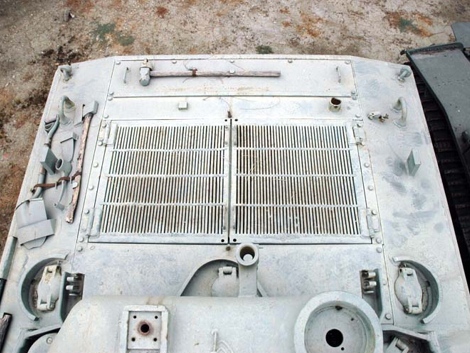 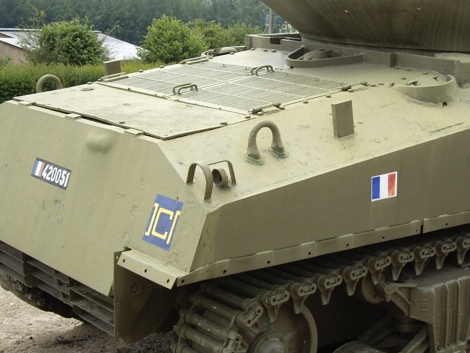 The "large grille" engine deck plate. After WW2, the conventional door hinges seen here were replaced with torsion bar/couterbalanced hinges. Note that the rear splash guard is different from the one found on small hatch M4A3(75) tanks. 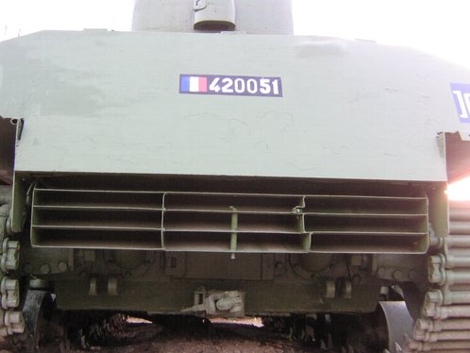 The exhaust system is the same than on Ford built M4A3(75)s. Here, the exhausts gas deflector system can be easily seen. 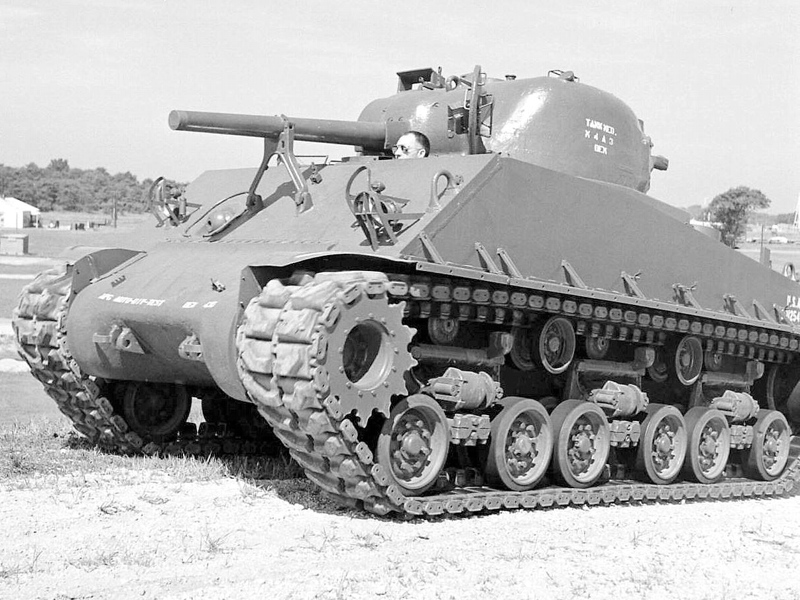 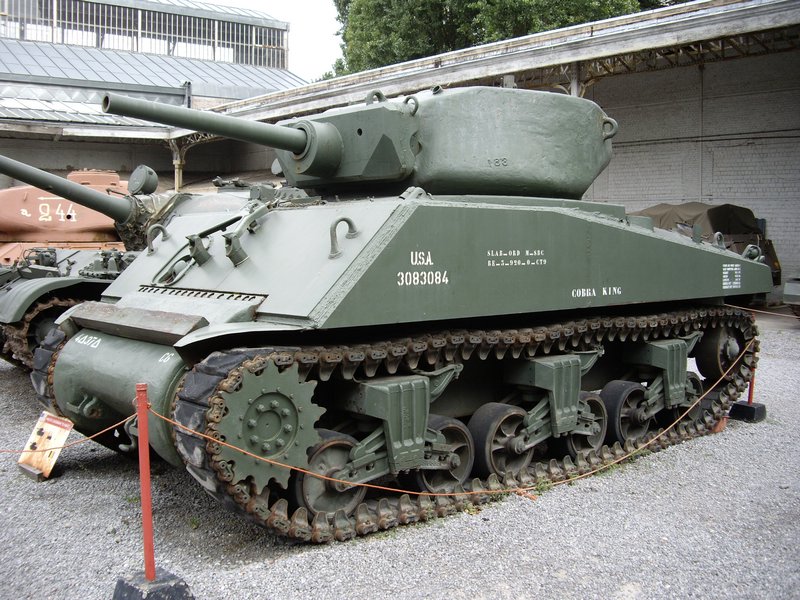 M4A3E2 "Jumbo". This kind of tank, based on an M4A3(75)W hull, was built with a 75mm gun, but it was often re-armed with a more powerful 76mm gun. It has large hatches, a 47° glacis and wet ammunition stowage. They had extra armor added to the hull and a thicker gun mantlet, a thicker differential cover and the turret was also better protected. 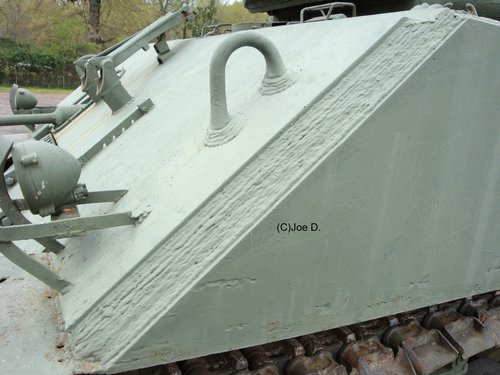 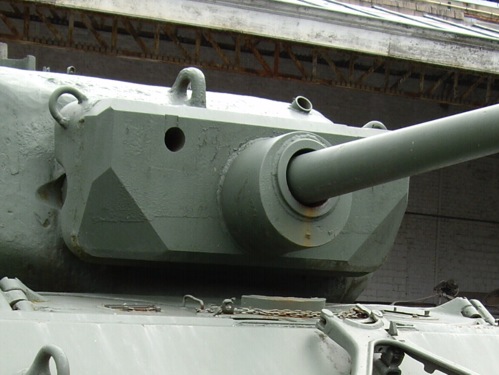 The mantlet is also thicker and has a specific shape. 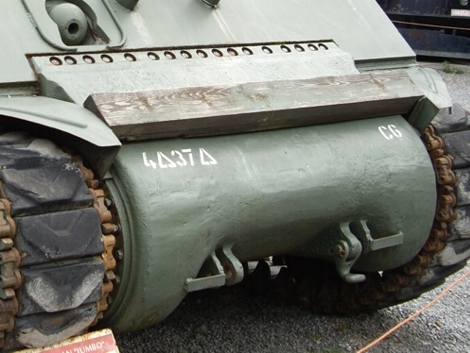 The 1-piece cast differential cover has a thickness that was increased to 5 1/2 inches. 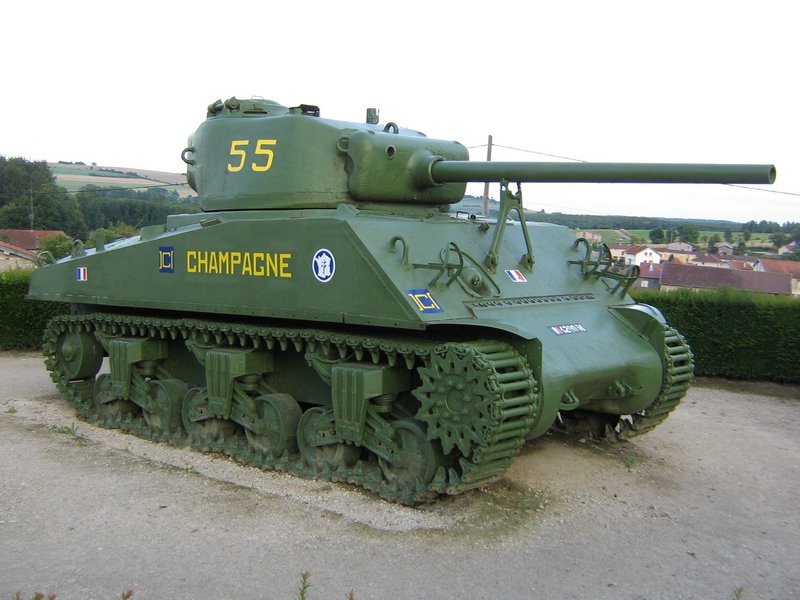 
M4A3(76)W Sherman (HVSS)
This variant was only manufactured by Chrysler (2617 units produced). 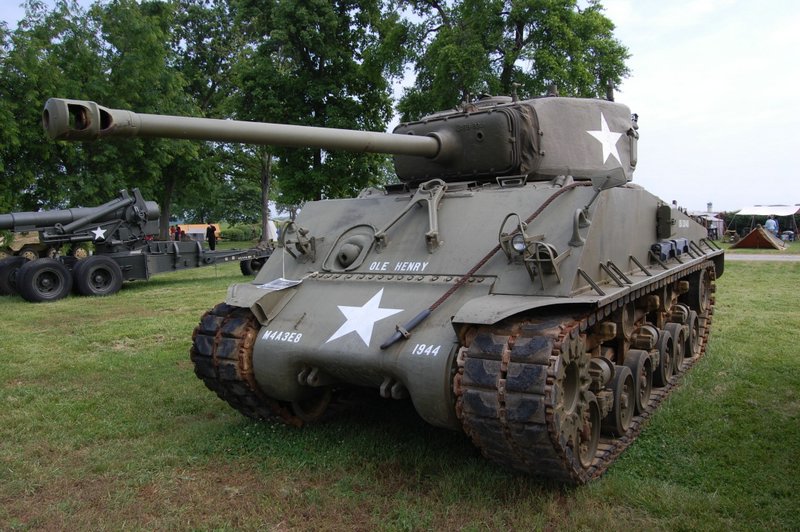 M4A3(76)W HVSS. This tank is nearly identical to the M4A3(76)W with a 47° glacis, larges hatches and wet stowage, but it has an Horizontal Volute Spring Suspension (photo courtesy of Roger Davis). Note that this kind of rubber tracks didn't see any service during WW2.


M4A3(105) Sherman (VVSS)
This variant was only manufactured by Chrysler (500 units produced). 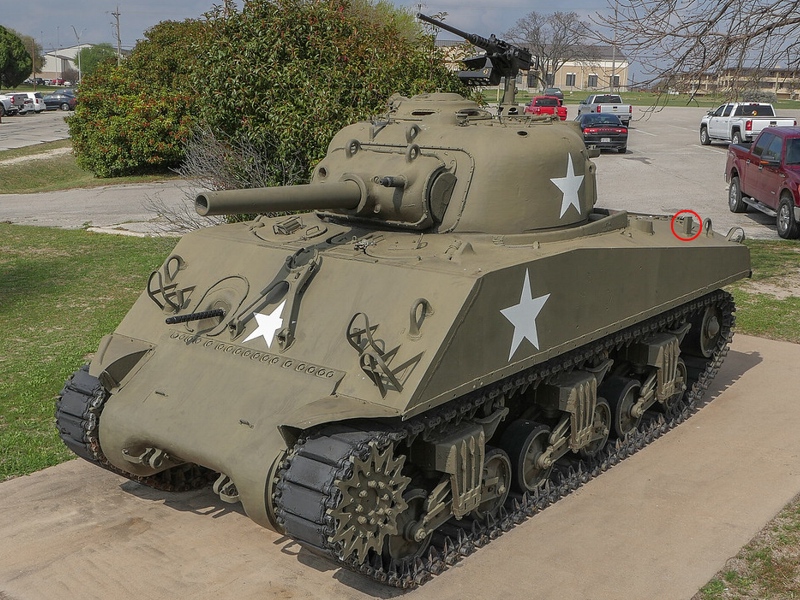 M4A3 105mm. This tank has a 47° glacis, large hatches and a dry ammunition stowage. It also has a "high bustle" turret with extra ventilator on rear top and the M52 gun mount for 105mm. It looks nearly identical to an M4(105), but it has an engine deck doors "stop" (circled in red), which doesn't exist on the M4(105) variant. Most of these tanks were converted to M4A3E4 in the 1950s. Photo courtesy of Paul Hannah. 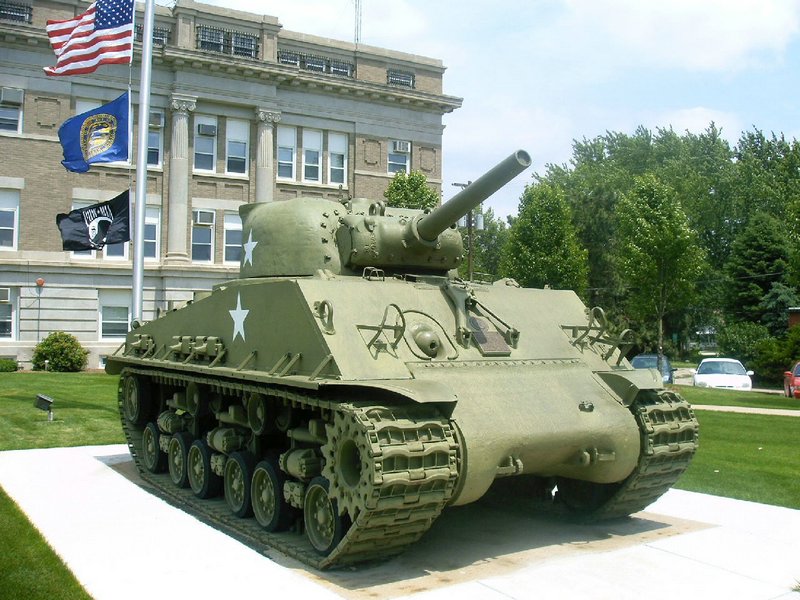 M4A3 105mm HVSS. This tank has a 47° glacis, large hatches and a dry ammunition stowage, it is equipped with the Horizontal Volute Spring Suspension.