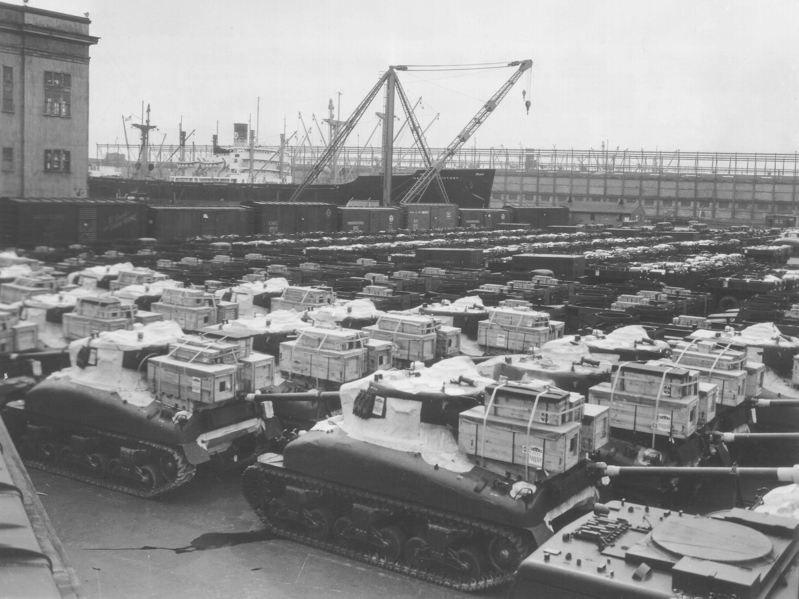 In 1949, the United States initiated the Mutual Defense Assistance Program. Allies and potential allies were provided with various kinds of monetary and materiel support in an effort to build up their defenses against the perceived threats of the Cold War. Many countries received tanks, most of which were WW II surplus. The above photo shows Half-tracks, Hi Speed Tractors, trucks & Shermans "hermetically" sealed & ready for MDAP shipment. New York Port of Embarkation, Brooklyn, March, 1951. 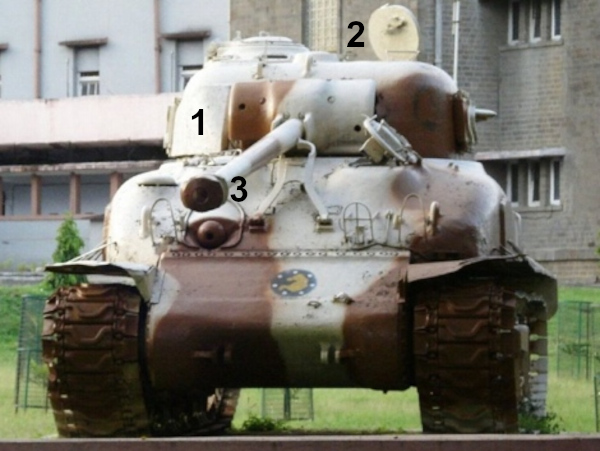 A couple of interesting Sherman variations were created specifically for the MDAP program - the M4A1E6 and the M4A3E4. The M4A1E6 was a "small hatch" M4A1(75) with VVSS in which the original 75mm was replaced with a 76mm gun. Some sources refer to them as "M4A1E4", no doubt assuming that both types would have been given the same "E number". The "E" stands for "Experimental", and the "6" indicates that this was the sixth experimental type of M4A1. To explain further, the M4A1E5 was the designation given to seventeen test Shermans modified in mid 1943 to provide for an "improved engine installation". Thus, the next open experimental designation for an M4A1 was E6, while it was E4 for the M4A3. The photo above shows an M4A1E6 displayed at the National Defense Academy in Khadakwasla, India. Photo courtesy of Warbirds of India website. 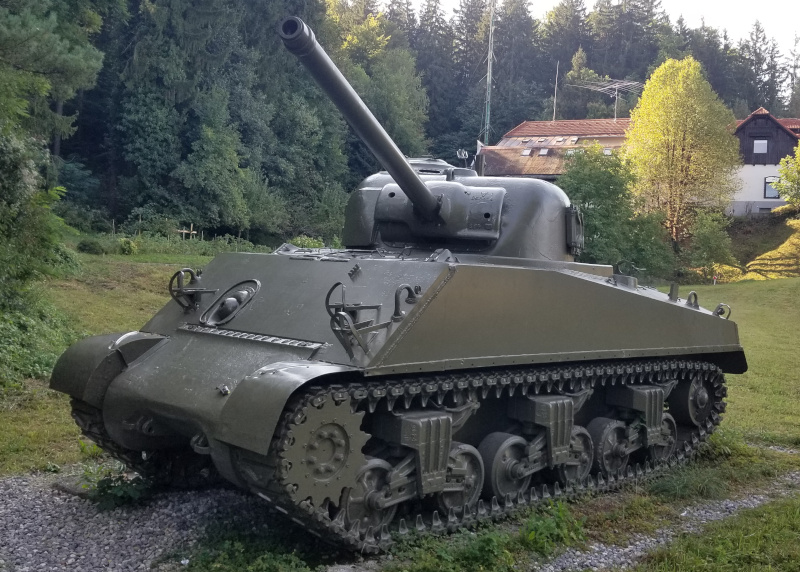 The M4A3E4 was an M4A3(75) Wet Stowage with VVSS up-gunned in the same way. Note that while most or all of the M4A1s would have had "small hatches", the specific mention of "Wet Stowage" indicates that the M4A3s would have been of 1944 production, and therefore equipped with large hatches. The limitation to only VVSS suspensions was intentional, as the US Army sought to equip its postwar troops with as many M4A3(76)HVSS units as it could find or fabricate by conversion. This included the use of other, undesired types as sources of conversion parts such as HVSS and 76mm turrets. The photo above shows an M4A3E4 on display near the Police station in Velenje, Slovenia.

Up-gunning to 76mm necessitated the conversion and rearrangement of the ammunition stowage. It is to be noted that the ammunition stowage was "Dry". The efficacy of "Wet Stowage" in preventing ammunition fires had been questionable from the start, and its use was officially eliminated in the late 1940s. Other changes were made to some interior fittings, the most notable being the relocation of the radio to the right sponson in order to help alleviate the cramped conditions in the small turret. 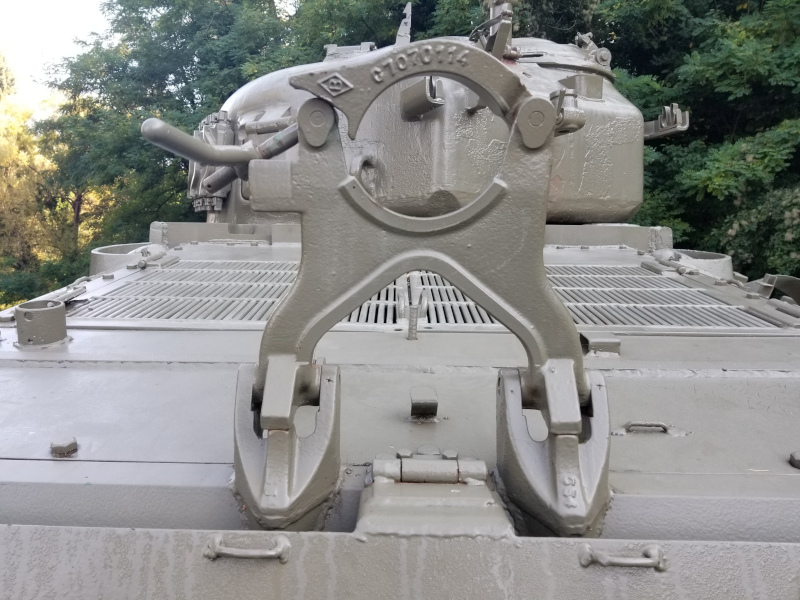 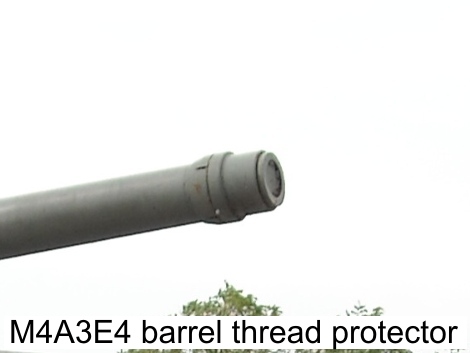 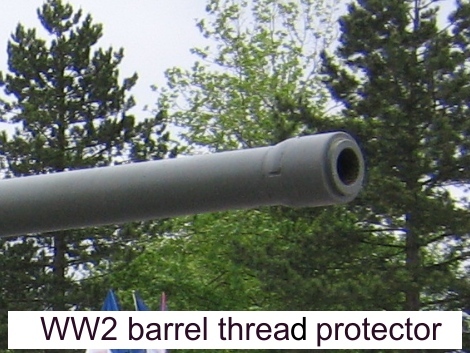 When modified for the 76 mm, the M34A1 gun mount was designated "M34A1E1". Standard 76mm guns M1A1, M1A1C or "M1A2 less muzzle brake" were used. The authors assume that the muzzle brakes were omitted so that they could be reserved to meet the requirements of the US Army. Thread protectors were to be cut down "to reduce weight" (sic).  In the above photos, note that they have a different appearance (right) from the thread protectors as seen on WW II era Shermans. 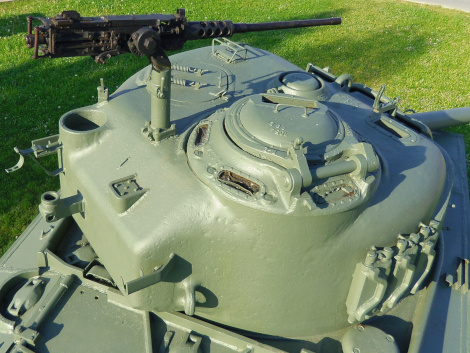 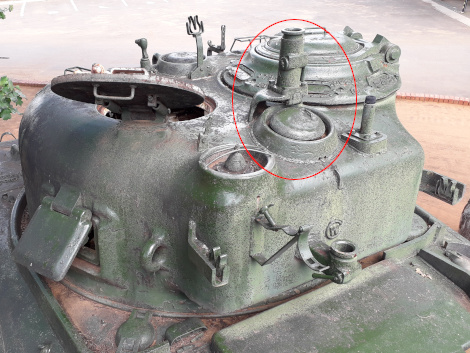 Ordnance Committee Item 34436 which described the changes to be made, only stipulated the use of Fisher built M4A3(75) (Wet) VVSS Shermans for the M4A3E4 conversion. However, the examination of a number of surviving examples shows that some were converted from tanks originally made by Chrysler as M4A3(105)VVSS's. In the absence of documentation, the authors can only speculate that the supply of M4A3(75) (Wet) Shermans was insufficient to meet the requirements of the conversion program, & M4A3(105)s, which were plentiful in the postwar inventory, were considered acceptable substitutes. Both types utilized high bustle, D78461 turrets, although the 105 turret had a second ventilator.  With the commander's vision cupola installed, both types were equipped with pintle stands for the .50 cal MG, but note how the pintle for the 105 turret was adapted to fit over the rear ventilator. Both photos courtesy of Gary Binder 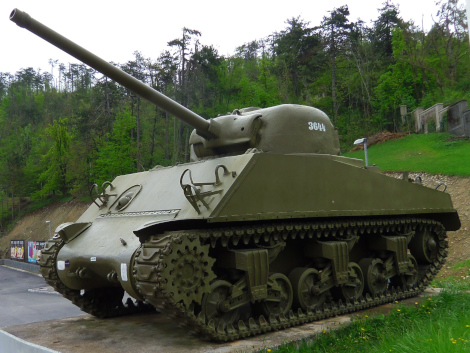 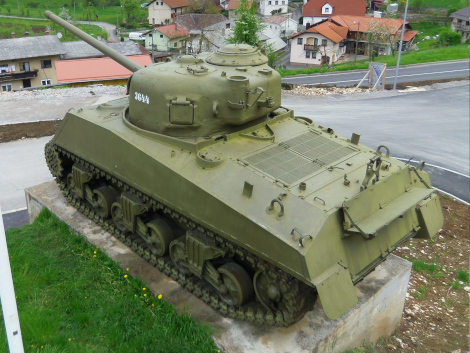 None of the M4A3(105) conversions examined to date appear to have former 105mm turrets. M4A3E4s have been noted with either high bustle, 75mm D78461 turrets or low bustle D50878 turrets from 1942 / 43 production Shermans. Again, in the absence of documentation, we can only speculate that the 105mm turrets may have been replaced because they didn't meet the requirements of the program, lacking both gyro stabilizers and power traverse. The photos above show a standard D78461 turret as mounted on an M4A3E4 on display in the Park of Military History in Pivka, Slovenia. 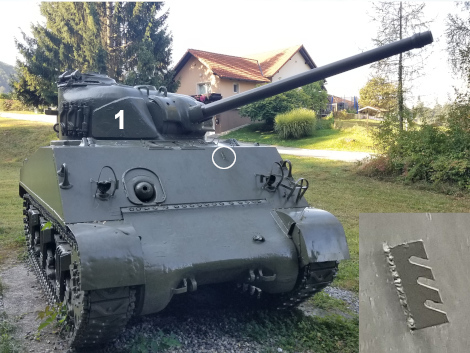 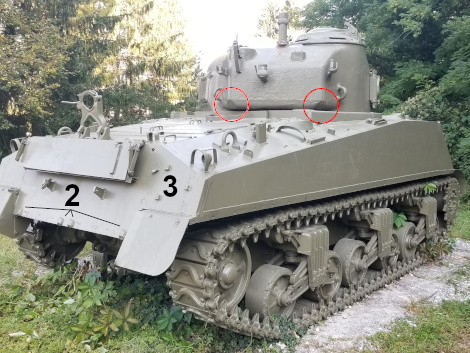 The photos above show a low bustle D50878 turret as mounted on an M4A3E4 on display in Velenje, Slovenia. The use of the D78461 turret would have been fairly straightforward, while the D50878 would have required a number of changes to bring it "up to spec". Most D50878s lacked loader's hatches, so that would have to have been added. If not already present, a "patch" (1) would have been required on the right cheek of the turret to compensate for the "thin spots" (further explanations here). Finally, some material would have to have been removed from the lower corners of the low bustle turret to provide clearance for the protrusions of the large hatch drivers' doors (circled in red). 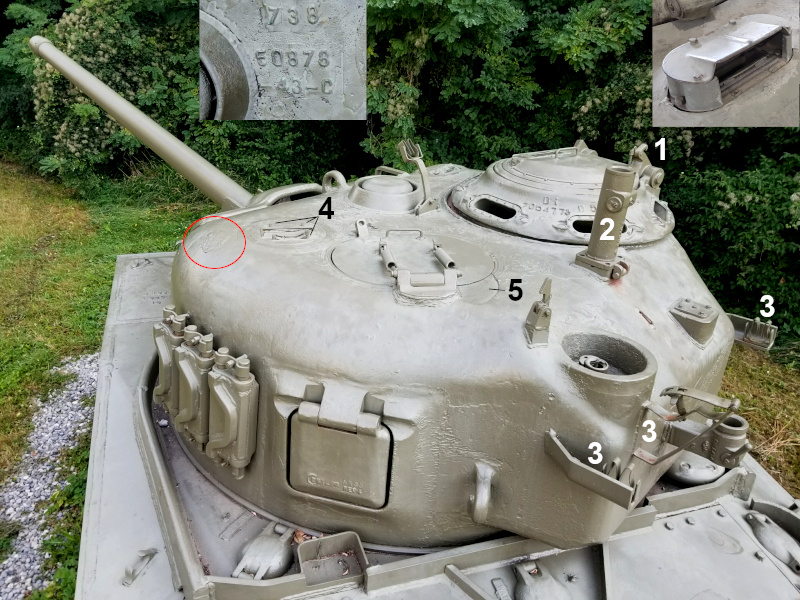 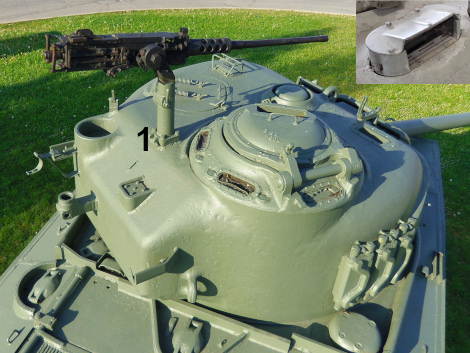 While the OCM does not stipulate the changes to be made to the turrets, period photos and surviving examples suggest that the addition of the commander's all round vision cupola was required. This modification included the installation of the .50 cal AA MG pintle on the turret roof (1). MG stowage on the turret bustle appears to have been mandated, along with periscope guards, if they were not already installed. The 2 inch smoke mortar along with the turret spotlight had been eliminated from the Sherman in 1945, and weld scars or patches suggest that the items were removed, if they hadn't been at an earlier date (2). As with other types of postwar VVSS rebuilds, spare track links were added to the sides of the turrets. 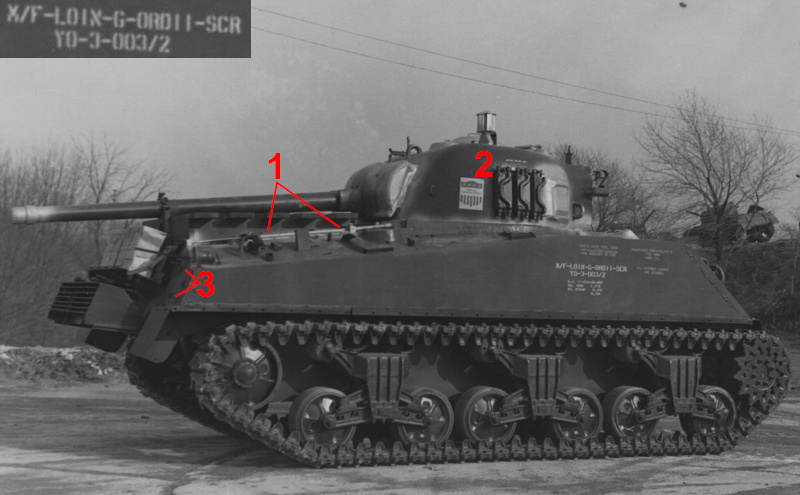 The exact number of M4A3E4s that were provided as MDAP is not known. Bowen-McLaughlin-York gave a figure of 310 conversions in one internal memo. The photo above shows a unit at BMY processed and ready for shipment. Note that this tank has a low bustle turret from a 1942 or 1943 production Sherman. The casting marks on the turret splash are more typical of Chrysler than Fisher, so this was probably an M4A3(105) conversion. Torsion bar helper hinges (another BMY project) can be seen on the engine deck, along with fittings on the upper rear hull plate for a late 1940s infantry phone. The "YO" in the shipping code probably indicates this tank was headed for Yugoslavia. 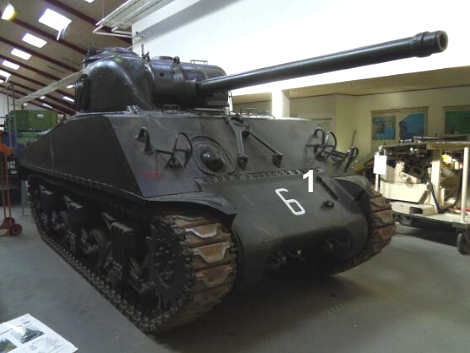 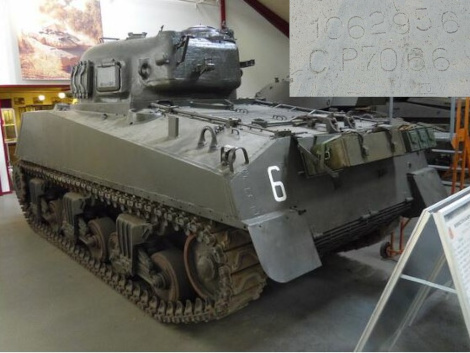 A Rock Island Arsenal M4A3E4 dataplate pulled from a surviving example (see below),certainly suggests that they did some more conversions. Unfortunately, most MDAP documents list the number of 76mm Shermans sent to various countries very generically as "Tank, Medium, 76mm Gun, M4 Series." Thanks to the fine research of Clause Bonnesen, we know that the eight "Tank, Medium, 76mm Gun, M4 Series" sent to Denmark were all M4A3E4s converted from M4A3(105)VVSS Shermans. Above are a couple surviving examples. 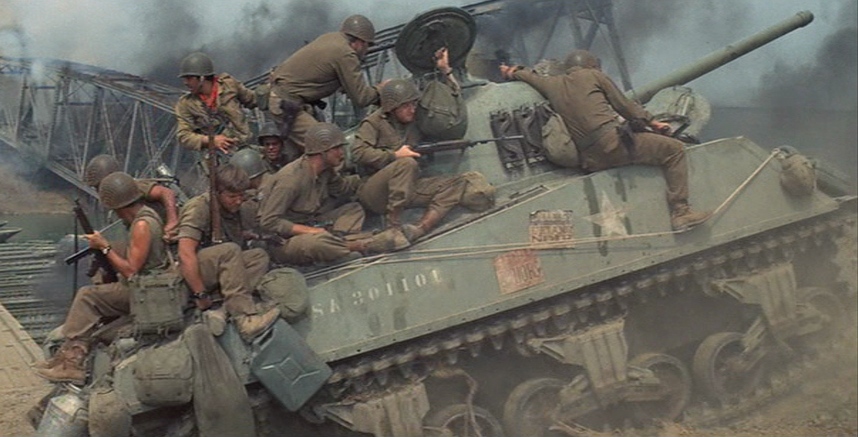 Surviving M4A3E4s are most numerous in the countries that once made up Yugoslavia. Perhaps the most famous examples are the ones featured in the 1970 film "Kelly Heroes".


The authors have found the M4A1E6 to be a much more elusive research subject. Bowen-McLaughlin-York stated that they were contracted to do 413 conversions. There is an interesting sentence in the description of the work - "Redesign gun shield and adapt gun and mount into 105mm turret." The BMY M4A3E4 contract was dated January 1952, while the M4A1E6 was dated May, 1952. Thus there may have been a chronology, with the M4A1s being the last to be converted. At that point the supply of 75mm turrets may have been running low, so that it became necessary to resort to the use of 105s? 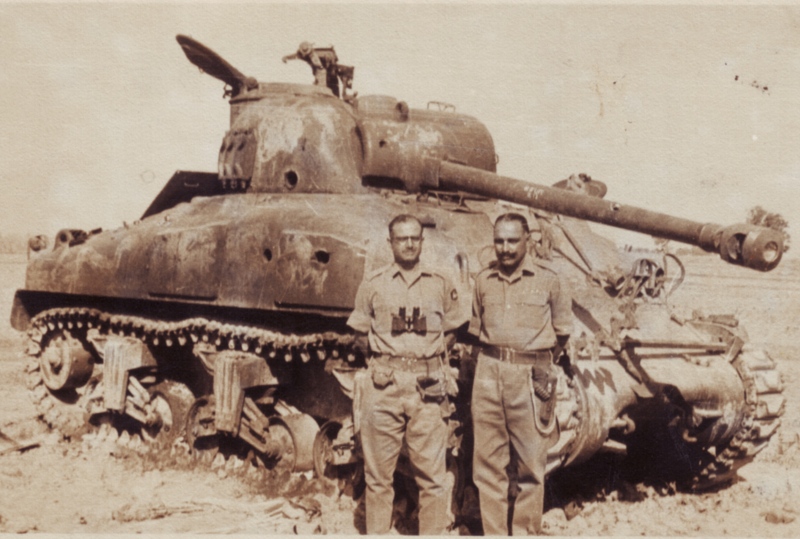 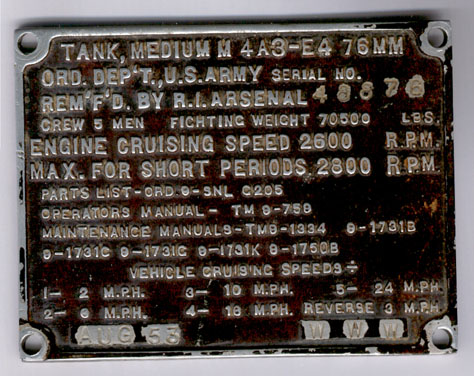 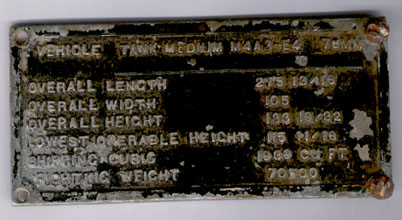 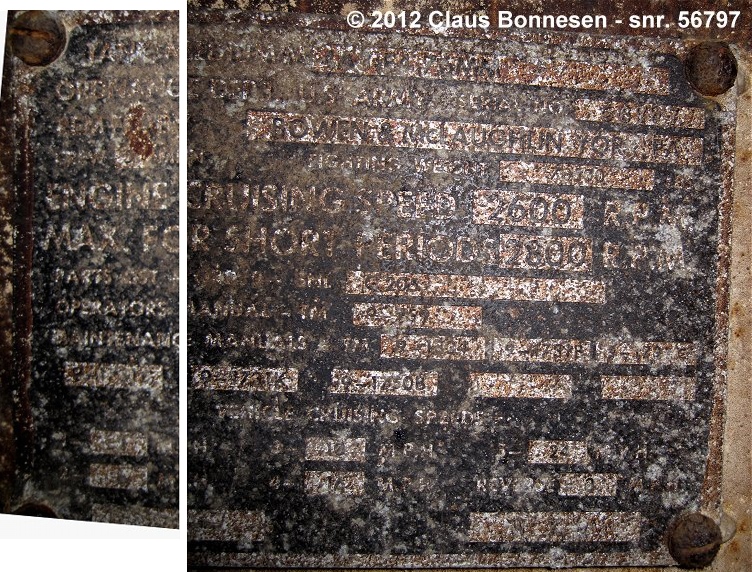 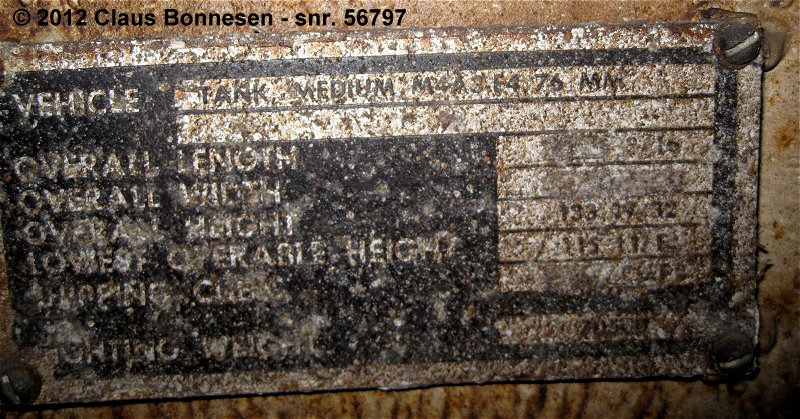